Volvo Cars Based On Racing Concept 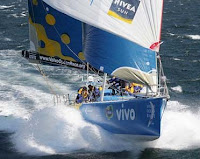 The Volvo car manufacturing company has announced it will produce three automobile models with features inspired by the Volvo Ocean Race, the prestigious around-the-world yacht race that attracts internationally respected sailors to compete for top honors.

The special models were announced by Volvo at this year's Geneva Motor Show, the highly regarded annual car show held in Switzerland.

The new models, to be known as Volvo Ocean Race Editions, will be associated with the V60, the XC60 and the XC70 in the Volvo lineup. Orders for the special editions are slated to begin in April 2011 with delivery scheduled to start in July.

Volvo company officials have not yet released details on the cost of the special-edition models.

Design details of the new Volvo models are inspired by sailing, the marine lifestyle and the challenge and exhilaration associated with high-level yacht sailing. Volvo offers two specially created colors in the new line, known as Volvo Ocean Blue II and Electric Silver. The Volvo Ocean Race logo will appear in strategic locations on the back of the cars' front seats. Leather upholstery in the cars' interiors comes in soft beige and off-black, according to Volvo. The logo will also appear in various spots on the exterior and interior of the special editions of the cars.

The new editions of the cars will also feature attractive chrome detailing and unique aluminum wheels.

Volvo is targeting an audience of professional and amateur sailors as well as sports fans who appreciate skilled athletes and dramatic competition and drivers who respect the seafaring lifestyle.

Volvo officials said they expect to sell 7,500 of the special-edition autos, with many of the customers coming from Germany, Sweden, Great Britain and Italy.

Karin Backlund, the director of global sponsorship for Volvo, said in an official statement: "With the Volvo Ocean Race, we have a fantastic opportunity to reinforce the brand and highlight specific characteristics such as design, dynamic performance and innovative technology. It enables our effort to move the brand towards more emotive values."

It is no surprise that safety is also an important consideration in the Volvo Ocean Race, which was established in 1973 under a different name and has been owned and operated by Volvo since 2001. The race takes place once every three years.

All boats in the Volvo Ocean Race are equipped with global positioning satellite systems so that the sailors can relay their precise location in the event of an emergency. Each entrant in the race is required to successfully undergo a training course in safety precautions before the event.

The next edition of the race is scheduled to begin in Alicante, Spain in October 2011 and finish in Galway, Ireland, in July 2012.