The History of the Volkswagen Beetle - The People's Car 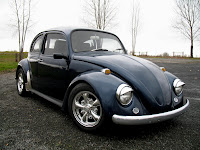 In 1938 the German automaker Volkswagen released their version of the economy car called the Volkswagen Type 1, or more commonly referred to as the Volkswagen Beetle. The names "Bug" and "Beetle" were adopted by the public, but it was not until late 1967 that Volkswagen began using the name "Beetle" in their marketing. It was previously known as only the "Type 1" or the 1200, 1300, or 1500, which were the names it had been marketed under in Europe prior to 1967. The numbers indicated the size of the vehicle's engine in cubic centimeters.

The 1967 model of the VW Beetle underwent a few changes, the car itself didn't get bigger, but many of the mechanical systems and components did. Some changes to the Bug included a larger engine. Output of the electrical generator had been increased from 180 watts to 360, and also had been upgraded from the old 6-volt system to the 12-volt system. The clutch disk was also made larger and changes had been made to the braking system, the flywheel, and rear axles.

Although the VW Bug has been widely despised for its styling, rough ride, weak power, along with high noise levels, it was also the longest and most produced vehicle for a single design.

The "Beetle" or "Bug" whichever you wish to call it also played a roll in the military. In 1935 prototypes of the Kdf-Wagen appeared.

Produced by Daimlet-Benz in Stuttgart, Germany the first prototypes were born. With its already peculiar round shape, and the rear-mounted, air-cooled engine, The factory only produced a small number of the cars by the time war began in 1939. The first mass-produced version of the Beetle were used for military vehicles, like the Schwimmwagen and the Kubelwagen.

The military bug was created to be as simple as possible, so that little could go wrong. The 985cc air-cooled motor proved to be effective with German Afrika Korps in Africa's desert heat with The built in oil cooler and the superb performance of the flat four, or "pancake" engine configuration. The suspension was equipped with compact torsion beams in place of the more commonly used coil or leaf spring suspensions.

Once World War II was over, the shortage of jobs led to the reopening of the factory in Wolfsburg by Allied forces. The production of the Beetle from then on recommenced. The production increased massively over the next decade, with the one millionth car rolling off of the assembly line in 1955. The Bug's performance was far superior compared to other automobiles in its category with a top speed of 72 mph. The production was surpassing 16 million in 1972, and by the 23rd of June in 1992 the company had sold over 21 million of the cars.

The Volkswagen Beetle is the world's best selling design with the same name. The VW Beetle outlasted most all of the other vehicles who had copied the rear-mounted air-cooled engine layout like those by Subaru, and General Motors.

The Beetle began to phase-out in 2003. The annual production ad reduced to 30,000 from its peak of 1.3 million in 1971. As the last Beetle rolled off of the assembly line, it was shipped off to the Volkswagen company museum in Wolfsburg, Germany.

The new VW Beetle has turned out to be a very popular car and has become a pop culture icon and been featured in many movies.