The History of Automobile Airbags 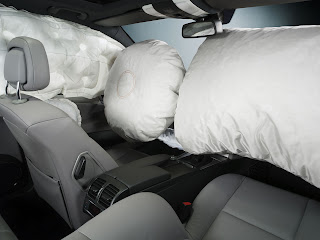 Even though airbags were both designed and patented for safe usage in the early 1950s, they would not come into any sort of widespread use until almost thirty years later. John W. Hetrick, a former Navy engineer, created the first airbag prototype in 1952. He combined his knowledge of the mechanics of compressed air, which he had gained from working extensively with torpedoes in the Navy, together with a strong desire to keep his family and other motorists safe while driving. The year after their invention, airbags were patented as a safe way to help prevent injuries in automobile accidents. When John tried to market his new device to the auto industry, however, he found most automobile manufacturers were more interested in profits than safety.

Airbags were first incorporated as a safety device for a passenger vehicle in the early 1970s. Studies showed that many passengers weren't interested in using their seatbelts when driving, so safety watchdogs decided to look for a device that wouldn't involve customer compliance. Ford and General Motors constructed fleets of experimental cars with airbags in order to fine tune the technology. It was soon found that, although airbags were not a viable alternative to seatbelts, they were an excellent supplemental safety system. Besides laws mandating the use of seatbelts, legislation encouraging car manufacturers to include airbags in their vehicles began to appear around the early 1980s. The 1980s saw a huge rise in the amount of airbags available in the car market.

Mercedes Benz and Honda made them available as options and Porsche offered them as standard equipment in its 944 model. In 1990, Chrysler, an industry leader at the time, integrated airbags into its entire array of vehicles, and this inspired many others to do the same. Audi had finally caught up by 1994 when it introduced airbags into many of its best selling models. Airbag development continued in the 1990s with many new variations being invented and tested. The side airbag developed and then evolved into two different types, the side curtain and the side torso. These side airbags, which inflated between the body and the door of the vehicle, were found to be highly successful in preventing head and torso injury. They also helped to diminish the chance of being ejected from the car should it roll over.

Today, the standard types of airbags are joined by rear curtain airbags, knee airbags, center airbags, and even seatbelt airbags, each with its own specialized safety function. Some motorcycles even come equipped with airbags to help diminish injury in a direct frontal collision. There are also airbag suits for motorcycle drivers, which help protect the driver's back if he is thrown from his bike.