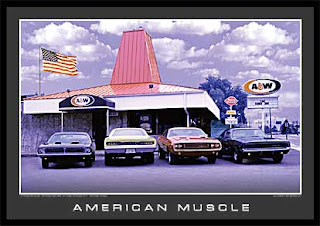 If there is one type of car that has captured the hearts and imaginations of Americans all over, both young and old, rich and poor, it's the American muscle car. These fine cars have been the quintessential image of the American automobile industry, and have become popular icons in modern culture, appearing as the vehicles of choice for fictional protagonists, the rich and successful, and those with free spirits yearning for the open road.

Muscle cars were born in the years between the mid 60s to the mid 70s. The typical model for sale back then was equipped with a very powerful engine, and sold at an affordable price. These cars were made for the average American who wanted to quench their thirst for speed and to satisfy their love for driving. With the many different styles and models coming from many manufacturers, there's a muscle car that can fit anyone's style and taste.

The muscle became weak and almost died, however, when fuel prices skyrocketed and the economy began to falter, forcing many Americans to trade their muscle cars for smaller, lighter, and less powerful cars. And for a while, this trend continued.

Soon, the love for the muscle returned, and the beauties of old began to be resold, by dealers who collect and restore old cars, or owners who saved their muscle cars in near mint condition.

American muscle automobiles for sale today vary in price, quality, engineering, and performance. Restored muscle cars are ones that have been saved from junkyards and old garages, and restored to perfect condition. They can be restored to near original form, with very minimal modifications, or can be modified to have modern technology.

Then there are originals, which are cars that have not been restored or modified. They are usually in tip-top shape, with the original engine, paint, interior, tires, and wheels, making them rare collectibles and fetching very high prices. These cars are usually sought after by car collectors who are passionate about the rich history of the vehicles.

Whether restored or original, one can be sure that one of these vehicles carries with it the heritage and legacy of the American automotive industry. And owning one is certainly both a privilege, and a pleasure.