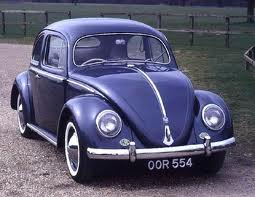 What does The Beatles, hippies, and Adolf Hitler all have in common? They all have something to do with the Volkswagen Beetle.

If you're one of the people who have lived through the psychedelic and groovy era which is the 60's, you've probably seen a Volkswagen Beetle. It can be pretty hard not to see one, it is the car which has the most units sold (20 million Beetles were manufactured, and some are still running today).

One of the proudest moments of the Volkswagen Beetle was when one was featured on the cover of coincidentally, the Beatles album cover for "Abbey Road". The Beetle on the cover instantly became a huge hit among the fans of The Fab Four. The car's license plate was stolen multiple times and went through different hands. The license plate became as popular, if not more popular than the car itself.

That original Beetle in fact, became almost like an icon that represented the era of the hippies. It is such a popular car that when it came up for auction in 1986, it was sold for an eye-popping amount.

Now while the Beetle with its air-cooled Boxster engine may not be have a lot of horsepower to spare, it more than makes up for it with its charming looks and versatility. The Volkswagen Beetle, or "Bug" as it is more affectionately called has a front bumper that seems to resemble a smiling face. And this feature is what made the Bug the hippies' car of choice. This friendly-looking car is used by the hippies not just to get from place to place; they also paint their Bugs with vibrant colours, in an effort to bring their message of love and peace to the masses.

But the Bug's history isn't all love and happiness. Most people don't even know that the Volkswagen Beetle's design was actually thought of by none other than Adolf Hitler himself. Hitler wanted a car that could be manufactured relatively cheap so that the masses could afford to buy one. This is where the company got its name; Volkswagen literally translates into "the People's Car".

But despite being the lovechild of the German Fuhrer, it still became one of the most recognizable car models, ever.